Best Pastel de Nata in Porto: the most wanted 8

Before we move on to choosing the best pastel de nata in Porto, which will always be a subjective exercise, let’s take a more comprehensive look at the phenomenon of popularity they represent. Pastéis de nata are arguably the most important Portuguese specialty sold worldwide and a unique gastronomic heritage, in Portugal and in the world. The basket of crispy puff pastry embraces the iconic cream in perfect harmony, and if still warm, it’s like a cuddle. This Conventual recipe is also capable of uniting nations. A good example is that in Europe’s largest technology conference, held in Portugal, people from 166 different countries consumed 97,000 portuguese custard tarts during the three days of the event.

The origins of this delicacy is yet to be precisely dated and there are several theories. Some point to the first handwritten recipe that approaches what is now the pastel de nata. A recipe from 1729, from the Convent of Santa Clara in Évora, the then so called “Pastelinhos de Natta”. Others believe that the genesis of this the portuguese custard tarts resides in Belém, at the Jerónimos monastery. What is indisputable is that this old recipe, a little mysterious, did not succumb to  time and continues to conquer fervent fans everywhere. Each fan will have their preference and certainly not everyone will agree, but we risk pointing out the best pastel de nata in Porto, or rather, as a precaution, pointing out the 8 most popular places, leaving the coronation in the hands of thoose the will try them all.

A walk through history, Confeitaria do Bolhão was founded in 1896 and is located at Rua Formosa, in front of Mercado do Bolhão. The current owners, during the renewal of the space, wanted to live up to history and endeavored to keep it as close as possible to the original space, integrating decorative pieces and original equipment, as well as the silver cutlery and Vista Alegre crockery, also characteristic of the house.

In addition to the visual part, they continue to excel in the diversity and quality of the products offered, as well as in a personalized service. In addition to the company’s star, a worthy candidate for the best pastel de nata in Porto, a traditional recipe with a genius touch, Confeitaria do Bolhão offers a world  miniatures that invite us to an authentic “tour” across Portuguese pastry. But that is not all, there is also a very rich offer of cured mini cheeses, worth trying.

Opened since 2017, Natas D’Ouro is a project by Pastelaria Soares, a family space with almost four decades of tradition. But, in contrast to the majority of our suggestions, what puts their custard tarts among the most desirable in Porto is the fact that they make alternative variations to the classic recipe. They introduce a twist, revisiting local traditions, with pastries in the shape of the traditional rabelo boats and recipes that include Port wine as an ingridient of the cream. But there is more. In addition to the cream with Port wine, there are experiments with orange, strawberry and even caipirinha. Each tart costs € 1.10 and there are menus that include a glass of wine as well.

The space is in Vila Nova de Gaia, and has a wide terrace at the foot of the river with an obvious appeal. But there is also a house on Avenida dos Aliados. 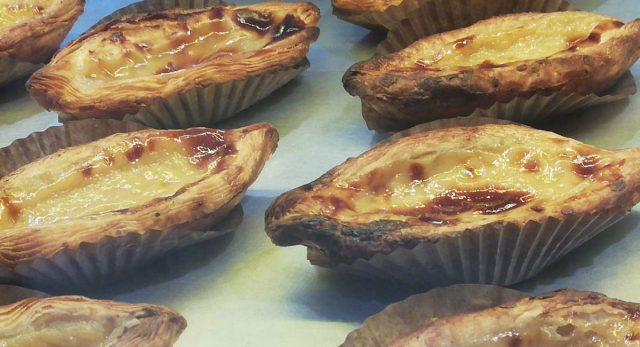 Another journey through time and tradition, Padaria Ribeiro is located at Praça Guilherme Gomes Fernandes, formerly Praça do Pão, in Porto Downtown. Cooking since 1878, its founders, like the generations that followed, gave the establishment an image of excellency and quality. The bakery has become a reference and its legacy has been honored to this day.

At Padaria Ribeiro we can expect a quick and careful service, as well as a terrace to taste the delicacies without haste. In addition to the irresistible custard tarts, which could not be overlooked in a list of candidates for the best pastel de nata in Porto, the mini almond tarts, the pasteis de Chaves and everything that takes puff pastry, often defined as divine, stand out. For the candy lovers, and for those who are desperate to find a last souvenir, there are cookies and jams of their own manufacture, neatly packaged.

In one of the most beautiful and emblematic streets of the wonderful city of Porto, Rua das Flores, we find Nata Lisboa, whose motto is “The world needs nata”. And the truth is that it has been successful in its mission, delivering an amazing example of the portuguese delicacy to an increasing number of people, always betting on friendliness and perfectionism. Nata Lisboa’s portuguese custard tarts are known for their crunchy and delicate pastry, and for a sublime cream, able to conquer the most demanding audience. And, to help, each piece costs just € 1.

Here, the watchwords are specialty and elegance. The space is located on Rua de Santa Catarina and has two floors. The decor features classic blue sofas, which also stand out in the Lisbon space, stone tables and lamps that leave no one indifferent. Right at the entrance you can see the entire production process, from the dough that is placed in the molds, to the cream and the grand finale – the 350º oven exit. And they are the heroes of the scene, still warm, sprinkled or not with cinnamon, accompanied by a well-taken coffee. Each pastry costs € 1 and a pack of six, € 6. There is also a menu that includes a glass of wine for € 2.20.

Both in Lisbon and in Porto, Manteigaria is always mentioned among the most beloved places to eat a portuguese custard tart. The formula for success is very simple and very transparent there: artisanal production, quality of the raw materials – whole eggs, quality butter instead of margarine, sugar, no conservatives and the process of opening the puff pastry that is all handmade. Confectioners go through several months of training so that everything is done well down to the smallest detail. The result is a crispy, crunchy pastry and a cream with just the right amount of sugar. These steps and ingredients, the importance given to detail, combined with the smiles of those who pass by, help to anticipate that, for many, Manteigaria offers the best pastel de nata in Porto. The space is located at Rua de Alexandre Braga, downtown, and each pastel costs 1.10 euros. 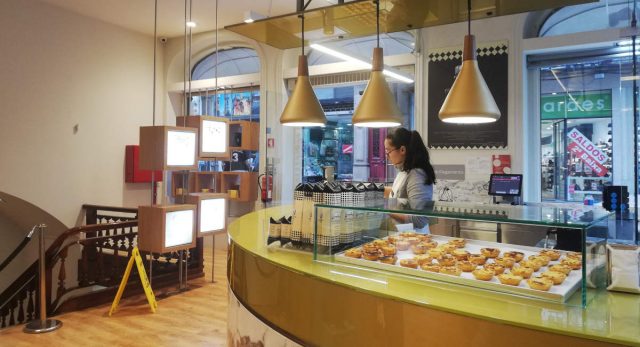 In Batalha, more precisely in Rua de Augusto Rosa, we find Neta 3. Possibly flies under the radar of several lists because it is mostly frequented by locals, but deserves to be mentioned. It is a renovated, spacious and airy space in which, several times, whoever passes through the door and enters out of curiosity is surprised, returns and recommends. What makes Neta 3 reputation is the diverse and fresh pastries, and the pastel de nata, with a super crispy pastry and a wonderful filling. A well-served coffee for two, with croissants and cream is around 7 €. The service is as friendly as the prices, giving authenticity and warmth to the space.

Moment’um is a restaurant for everyone. At the foot of Campanhã Train Station, it is a good choice when you need to wait for the next departure or even if you are exploring this area of the city. The atmosphere is relaxed and familiar and there are several vegan options. The pastelzinho de nata won its version without animal origin but kept his magic. But there are more appeals in Moment’Um, a vegan chocolate bread, carrot croissants and bread rolls that come out warm from the wood oven. For those looking for more and that look at the pastel de nata just like the cherry on the top of the cake, dishes such as roasted loin or duck rice, also made in a wood oven, are served. Well worth a visit!